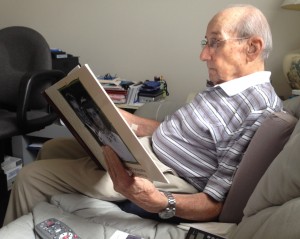 Some siblings wanted to celebrate their father’s 90th birthday in a unique and meaningful way.  They commissioned me to write their father’s legacy letter book.  Every legacy letter book is special; however, this one was exceedingly special.  The father was a WWII veteran who never shared his WWII stories with anybody – not his wife, not his children.  Seventy years of silence passed, until now, that is.

I was to interview this gentleman (and he was a gentle man) for supposedly two-one-hour sessions.  Two hour became seven hours.  A trickle of information ultimately became a fire hose of stories.  This gentleman finally unloaded his war experiences, most of which were horrific  requiring  us to be selective.  Never-the-less, he shared them with me and together we created a fascinating book which made history come alive within the  context of this colorful clan.

The book also included a few pages of his wife’s memories from her family history. This was challenging because she suffered from a stroke and was experiencing some dementia. Some family members were skeptical that this woman could contribute anything meaningful for the book because of her health limitations.  I held her hands, looked straight into her eyes, and let her know I knew what a dynamic woman she is.  For example, she was the first female president of her temple and a generous philanthropist.

My patience paid off.  She slowly shared how they met, why she fell in love with her husband, what her sons and their families mean to her and important stories about relatives on her side of the family.  I sent the parents drafts of their letters and asked the husband if he shared her section of the legacy letter book with his wife. He  didn’t because he didn’t think she was capable of giving feedback.  I felt I could not print her section without her feedback so on my next visit I shared her draft with her and her paid caregiver.  Together they read it together.  She told me she loved her section, but I misspelled her father’s name!

As for the 90-year-old veteran, some of the sons were skeptical that their father could use the Word’s program’s editing function when reviewing his draft letter.  He did terrifically and also  helped improve the photographs, with special software, before I incorporated them into the book. There are many reasons why we all need to capture our veteran’s stories before it is too late.  But, perhaps, the most compelling reason is based on a story I heard from the sons about their father when he received his book.  He spent the day with his sister going through the book and reminiscing about their parents and their youth.  Afterwards, the veteran and his sister said good-bye to each other forever.  She was moving back to New York to live closer to her daughter, and they both knew that they would not see each other again because they were too old to travel.  Going through this man’s legacy letter book with his sister was perhaps the best way to say good-bye.