My Dad, Me Action! 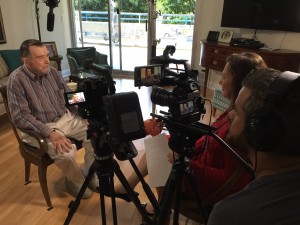 Yesterday was an unusual day.  Before I tell you about it, let me give you some background.  For the last few months, I have been conducting legacy letter writing classes at my parents’ retirement community in Delray Beach, Florida.  One of the residents who attended one of my classes told his grandson– a documentary filmmaker– about the class.  .  They both thought legacy letters would make a great documentary.  I met with the documentarian and we agreed to work together on this project.  To date, he has interviewed my students from classes I conducted in Stuart and in Delray Beach, Florida. He also filmed the actual event of a student giving her legacy letter to her daughter and filmed a class session in Delray Beach.  You can imagine how moving the footage has been.

But today was especially emotional for me.  Today the documentarian filmed my father talking about his legacy letter book and what it has been like attending my class.  My father was actually my first “client” or should I say Guinea pig.  When I began my legacy letter writing service, in 2011, I asked my father to allow me to try out my interviewing process with him and ghostwrite his letter.  Based on the transcript of the interview, I wrote his letter in “his voice” and he edited my draft.  I then designed my very first legacy letter book, incorporating the edited letter.  I experienced firsthand the power of hearing stories about my own family I never heard before.  More importantly, I witnessed my father bringing forth submerged memories and making sense of them on a conscious level. This is the process I call “harvesting your wisdom.”

It’s been five years since my father and I collaborated on his legacy letter book. Now he is ready to update his book.  Much has happened in the last five years and he is eager to get his new insights and stories down on paper to share and preserve them for his family.  He is participating in my current class and developing new content for his updated letter.  However, it wasn’t until I heard his answers during yesterday’s interview for the documentary, that I realized how important it is to update your letter.  So for those of you who have already written your legacy letter, perhaps it is time to update it.  And for those of you who have not begun this deeply satisfying yet challenging effort… what are you waiting for?