Letter-Writing Does Not Have to Be a Lost Art

Letter-Writing Does Not Have to Be a Lost Art 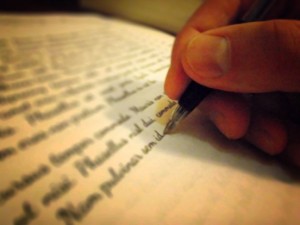 I  resisted  text messaging, but broke down when my son would only respond to text messages (as opposed to phone messages.). We send Gazillions of texts, tweets, emails and Facebook messages  each day. Yet, in a NPR article, according to the post office, the average American home receives only one personal letter about every two months. Is your household above or below this national average? As the founder of Legacy Letters, I am embarrassed to tell you where our household stands.

My son wrote a thank you letter to his grandparents this week for a gift he received. I am happy about this gesture, but it is probably the first time he ever wrote them a letter. The gift was a second car they no longer needed. My son wanted to email them a thank you note and I said that won’t do for such a generous gesture. A letter via snail mail would be a better vehicle to express gratitude.

My parents recently moved from their home in New Jersey to a continuing care retirement community in Florida. I joke there is a state law requiring New Yorkers and New Jersey residents, of a certain age of distinction, to move to Florida. My son and I went to visit them to pick up the extra car. More importantly, we came to help them downsize, and in doing so, we came across old letters. Reading the letters were almost like a time portal. Did we get as much pleasure reading these letters the first time as we did the second time? I would guess the second reading was extra special for many reasons, but one glaring reason was the simple novelty of reading a letter.

Recommend: “To the Letter: A Celebration of the Lost Art of Letter Writing,” is published by Gotham Books.  By Simon Garfield